Last year, the CHGP was cancelled since the Covid restrictions meant that no spectators would be allowed. This year, the event ran as scheduled, but Covid travel restrictions and the carnet requirement for British participants had a very adverse effect on the number of entries for the Formula Junior race.  Only ten were entered and when David von Schinkel (Spider-BMC) and Reijo Heurlin (in the Finnish one-off Lotus 20 copy “Elhoo”) were unable to attend, only eight remained. With the rate of attrition usually being high in Copenhagen, there were fears that there would not be many left for Sunday’s finale.

The format was timed practice Friday evening, which decided the grid positions for Saturday’s race. The outcome of this race gave the grid positions for the all-deciding finale on Sunday. The eight of us who showed up were Christer Larsson (Cooper T52), Robin Longdon, who had a drive in Jac Nellemann’s Alfa Dana, Jac Nellemann himself (Volpini), John Neel in the Lova-DKW Mk 10 (once owned by Chairman Duncan), me Lars-Göran Sjöberg (Cooper-Ford T59), Petter Huse (Focus-Ford Mk IV), Hans Hillebrink (Lotus-Ford 20) and finally Mogens Christensen making his Formula Junior come-back in Rich Spritz’s BMC Mk 1. Rich had planned to come to Europe for Copenhagen and the Oldtimer Grand Prix, but when the latter was cancelled, he decided it was not worth the trip for only one race. Mogens, who is housing the BMC for Rich here in Europe, then got the offer to drive it. In other words, it was a Viking only list with Robin being the only exception (but living in Knutsford, maybe qualifies him as half-Viking). Four Category E cars (1958-60) and four Category F (1961-63).

Friday noon meant the usual parade from the track at Bellahøj into Copenhagen city centre and the Town Hall. In the absence of Iain Rowley, Robin Longdon had been entrusted with driving the Formula Junior drivers in Jac Nellemann’s early 50s Chevrolet station wagon, all under escort by policemen on motorbikes, who made sure that no one had to worry about minor disturbances such as traffic lights showing red. The reception at the Town Hall included speeches by the Lord Mayor of Copenhagen, Jac Nellemann and the Chairman of the Danish motorsport union followed by the delicious Town Hall pancakes, all in the presence of HRH Prince Joachim of Denmark.

Timed practice followed on Friday evening. On my fourth lap, which was the first trying to go fast, I lost it in the corner before the start/finish straight and hit the wall. The Copenhagen track is very unforgiving…  Huse, who was behind me, completed his fast lap, but then the double yellow flags after my crash meant it was not really possible for anyone else to post a fast lap for the remainder of the session, especially since the safety car was deployed with a couple of minutes left.  This left Petter Huse with pole position almost nine seconds ahead of Jac Nellemann. I was awarded third fastest time followed by Longdon, Hillebrink, Larsson, Christensen and Neel. At a post-practice technical control, Larsson’s Cooper T52 was, however, found too noisy (111 dB against a max limit of 105) and he was excluded from the session and moved to the back of the grid.  Despite his quick time, Petter had brake problems and had to take the escape road through the bus stop chicane on one occasion. Also Hans Hillebrink said his brakes felt unreliable, while Christensen was trying to overcome gear selection problems.  Last but not least John Neel said the Lova was suffering from teething problems including binding brakes. The Lova, with its DKW engine, sounded and looked like a jet fighter with afterburner, with unburned fuel causing a nice standing flame from the silencer. It seemed to be normal routine to quench the fire in the silencer with water, when the engine was stopped.

There was a threat of showers for both Saturday and Sunday, but the track stayed dry for the Formula Juniors.  Race one saw the grid reduced to seven starters, with my T59 hors-de-combat. Huse had replaced a leaking calliper to cure his brake problems and Hillebrink had also made some adjustments.  Larsson had managed to get his Cooper’s noise level down below the limit and was allowed to start from the back of the grid. Huse was fastest away at the start ahead of Hillebrink, Longdon, Larsson, Nellemann, down to 5th after a bad start and finally Christensen.  Neel’s Lova had stopped on the formation lap, so the safety car was deployed on the 1st lap to allow recovery of the stricken Lova. Unfortunately Mogens Christensen was forced to retire the BMC on the first lap as he was unable to select anything but first and second gear.  When the safety car pulled in and the race was on again, Huse took a commanding lead well ahead of Hillebrink. After a couple of laps, Nellemann caught and passed Larsson and the two of them closed in on Longdon. A lap later, however, Nellemann was another retirement, parking his Volpini with only fourth gear remaining.  Larsson hung on to Longdon, who suffered from bad brakes, but was unable to pass, being two tenths of a second behind at the finish. The finishing order was Huse, Hillebrink, Longdon and Larsson, which decided the grid positions for Sunday’s finale.

The four survivors from Saturday’s race were joined on the grid for the finale by Mogens Christensen, who, with the help of Robin Longdon, had fixed the gear selection problems. Unfortunately, the Volpini’s gearbox issues could not be repaired, so Nellemann was a non-starter as was John Neel. Hillebrink took the lead at the start, but was passed by Huse after the first corner, who then cruised on to a comfortable victory 3.5 seconds ahead of Hillebrink (compared to his Saturday winning margin which had been close to one minute). Initially Longdon and Larsson were nose to tail in third and fourth, but then Larsson started to drop back with brakes that gradually got worse.  Christensen, finally, now with all gears available, made it to the finish in fifth position, of course not risking anything in Rich Spritz’s car.  All three on the podium received champagne, flowers, and for the winner a nice Certina watch.

The Copenhagen Historic GP has now been granted permission for the next three years by the City of Copenhagen. Hopefully, we will see more FJ entries during the coming years. The aim is to have so many that there can be separate grids for front- and rear-engined cars. An upgrade of the circuit to the status required for hosting a round of the Lurani Trophy is also in the plans. 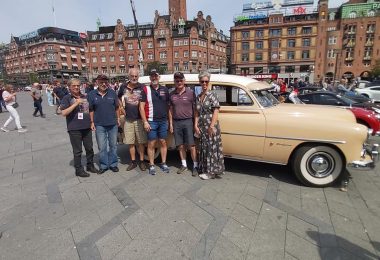 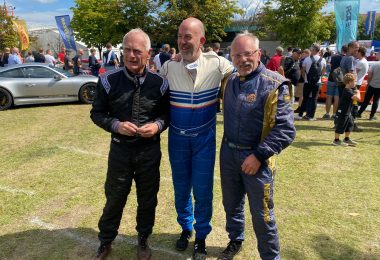 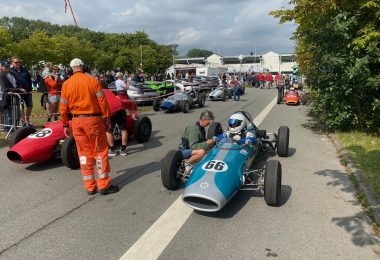 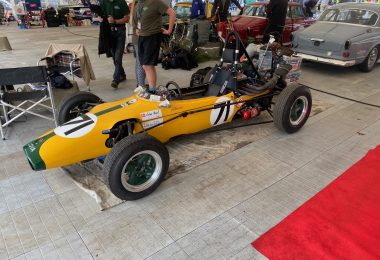 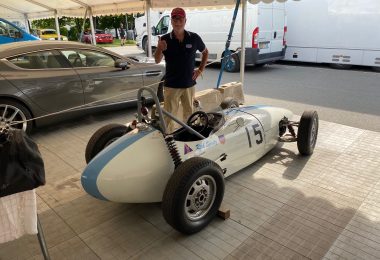 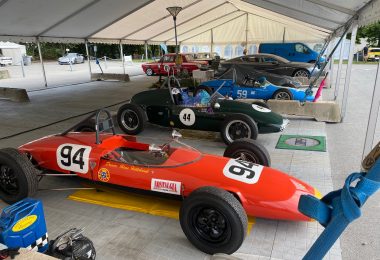 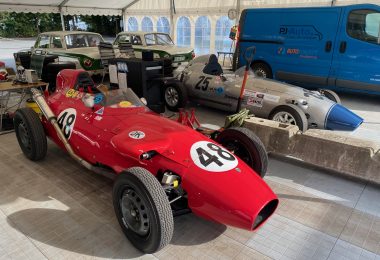