A couple of years ago, the Copenhagen Historic GP, which is traditionally held on the first weekend of August, seemed to have established itself on the FJ calendar with a decent number of entries. This despite being squeezed by other major events both the weekend before and the weekend after. Sadly, last year as well as this year, Formula Junior entries fell to single digit numbers.  It would be a great loss if Formula Junior would have to be dropped in the future because of lack of entries.  It is indeed a great event on and off track (if one is not intimidated by the concrete walls lining the track). The weekend includes a parade, with police escort, into the city centre with a reception at the town hall, the famous town hall pancakes and then back to the track at Bellahøj. Those Formula Junior drivers who stayed at the track were driven to and from the town hall by Jac Nellemann himself in his early fifties American “Woody” station wagon.  Perhaps it was best that Jac drove it himself, since in the past, when driven by Robin Longdon or Iain Rowley, it had showed a certain reluctance to start…  Anyhow, those of us in the car got a good chance to practice our “royal wave” to the crowd lining the streets.  To continue on the non-racing theme, we were also treated to an excellent dinner in the elevator at the Östergro restaurant.  Those who have attended the Grand Prix before, know what I mean.  And before leaving the paddock on Sunday evening, the Formula Junior drivers were treated to a “goody bag” with champagne, three bottles of beer and two small bottles of gin (and tonic to go with it) and some non-liquid stuff. Thank you very much, Jac Nellemann.

Now, it was not all about socializing.  We had some racing to do as well. Those who attended were past winners Petter Huse (Focus Mk IV) and Robin Longdon (Lola Mk 5A), Tony Olissoff (in Nelleman’s Alfa Dana), Hans Hillebrink (Lotus 20), Rich Spritz (BMC Mk 1), Lars-Göran Sjöberg (Swebe-Cooper) and John Neel (Lova-DKW). Finally, period F3/1000 racer Ole Vejlund (87 years old but still active) in a borrowed Lotus 51 Formula Ford was a late entry to make up numbers.  Dave Watkins (Elfin) was also entered but had to give the event a miss in order to figure out why his engine had been pushing out oil at Oulton Park the previous weekend. Anyhow, it was a truly international grid with drivers from Norway, UK, USA, Sweden, New Zealand and Denmark. Had Dave made it, we could also have added Australia to the list.  Sadly missing was Jac Nellemann himself. The gearbox in his Volpini failed at last year’s race, and it has not yet been repaired.

Qualifying started late at around 7 pm on Friday evening on a mostly resurfaced track (no bumps worth mentioning this year). The layout had a small change, since the first chicane (on Hulgaardsvej) had been changed from being a bumpy left-right-left to a smooth right-left-right.

Longdon was the first one out on track, but already on the second lap, Hillebrink overdid it under braking for the bus-stop corner and ran into the back of Longdon’s Lola, causing damage to both cars. This left Huse to secure pole position 14 seconds (!) ahead of Olissoff. The times recorded by Hillebrink and Longdon before the collision gave them third and fifth position on the grid with Spritz in fourth. Sjöberg got a technical flag for a non-functioning transponder, but back in the pits it gave a signal. Not so, however, when out on the track so he would have to start from the back of the grid with no recorded time. Vejlund’s Formula Ford had some issue and although he recorded a very slow lap, decided to pack up and go home.  John Neel, in the noisy Lova-DKW did not go out for qualifying and would therefore join Sjöberg at the back of the grid. The Lova makes a most amazing noise but seems to idle at at least 5000 rpm and shows no signs of torque throughout most of the speed range. Maybe some milder porting would be an idea? It is doubtful that it would have been below the allowed noise limit, so maybe that is why Neel stayed in the paddock.

The damage to Longdon’s car included bent radius rods, a damaged damper as well as a damaged silencer. Everything was repaired overnight by Nellemann’s mechanic Enrico Reck, who also found time to straighten a bent steering rod on Hillebrink’s car, so both cars were ready to race. Olissoff had found the Alfa Dana’s brakes somewhat doubtful, so new brake shoes were installed.

Race 1 on Saturday afternoon, for 15 minutes plus one lap, only served as a race to decide the grid positions for Sunday’s all-deciding finale.  Huse took the lead from the start, but already after the first corner Longdon moved up to second position.  Part way round the lap, the leaders caught the safety car and van towing the Lova and Robin was somewhat quicker on the throttle after they cleared the obstacle and took the lead but Huse quickly re-established himself in front. The race developed into a terrific battle between Huse and Longdon, the two of them changing positions several times and never being further apart than one-two car lengths. When the two of them passed the start/finish line after 15 minutes with Longdon in the lead, they were shown the sign two laps remaining, so Huse’s strategy was to make a pass on the final lap. Much to their surprise, they got the chequered flag next time around with Longdon still leading, half a second ahead of Huse.  To make sure that the flag was not a mistake, Longdon continued for another lap, while the others went back into the pits, with the exception of Olissoff. He had obviously found a liking to waving to the crowd during Friday’s parade into the city centre, so he put in an extra lap to wave at spectators and marshals.  Of the others, Hillebrink could not really keep the pace of the two leaders and after five laps, his lap times got slower and the engine sounded worse and worse, but he still managed to finish third, albeit a lap down.  Olissoff finished fourth with Sjöberg in fifth (who was very conservative with both engine revs and braking distances, since he had an invitation to Goodwood Revival and did not want to risk anything) and Spritz in sixth, both two laps down. Neel managed to make it to the grid for the start, but not any further, his engine starting to boil just before the lights went out. Compared to qualifying, the lap times in race 1 dropped significantly as more and more rubber was laid on the new track surface.

For Sunday’s finale, the cars lined up according the results of Saturday’s race, but sadly Hillebrink was missing. His Lotus had been diagnosed with a defect lifter and/or camshaft. Missing was also Neel in the Lova, so the grid only comprised a disappointing five cars. Just before the start, a very local shower made the track very slippery from the start/finish line and halfway through the lap, while the second half remained completely dry. Longdon led into the first corner but was passed by Huse on the following straight. The battle between them from then on continued as in race 1 with passing and repassing, much to the delight of the spectators.  This time, however, Huse made no mistake after the 15 minutes had gone and made sure he was at the front when the sign for 1 lap remaining was shown. Further down, Olissoff held on to a lonely third position and managed to finish on the same lap as the leaders.  Spritz initially challenged Sjöberg for fourth position by some spirited braking in the wet, but was handicapped by only having third and fourth gear, so after a couple of laps, he dropped back.  Sjöberg thus finished a lonely fourth and Spritz a likewise lonely fifth, both of them lapped once by the leaders. And Olissoff once again made an extra lap of honour waving at spectators and marshals. Champagne and flowers for the three podium finishers, and in addition winner Huse also got a Garmin dash-cam. 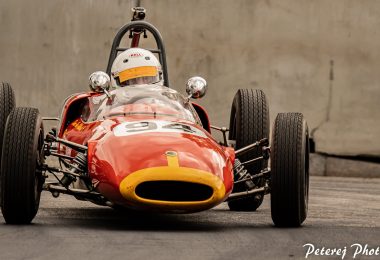 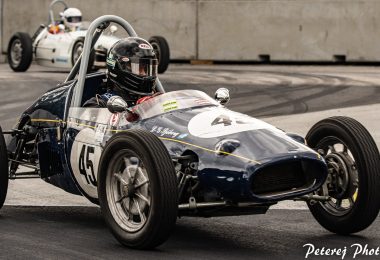 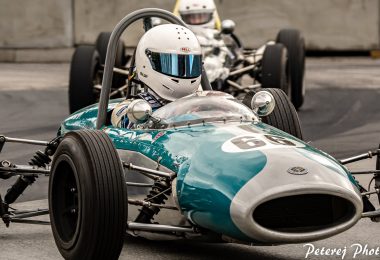 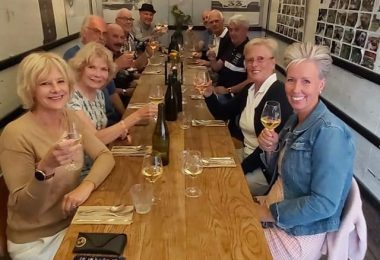 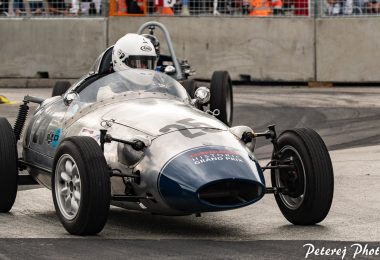 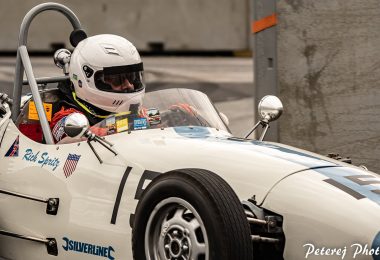