This year’s event marked the 16th time that the Copenhagen Historic Grand Prix has been run.  First time out was in 1996 and since 2006 it has been an annual event.  That first event back in 1996 coincided with Copenhagen being that year’s Culture Capital of Europe. What could have been more appropriate than having a gathering for historical racing cars?  The location of the track within Copenhagen has altered slightly over the years, but from 2004 through 2012 it was on a street course in Faelledparken, originally only some 1.1 kilometres and later increased to 2 kilometres. Since 2013, another street course of some 2.4 kilometres has being used, which winds its way around the Bellahöj sports centre.

The traditional date has been the first weekend in August, but this year the Grand Prix took place one week earlier over the weekend July 30-31.  This worried race promoter, and Formula Junior driver, Jac Nellemann because it therefore coincided with the Silverstone Classic rather than falling nicely in between Silverstone and the Nürburgring Oldtimer Grand Prix.  Anyhow, in the end the Formula Junior race had 16 entries (including one F3/500 and one F3/1000), which is about on par with previous years; six Danes, four Brits, three Swedes, and three Australians.

Practice saw Jonathon Hughes (Lola Mk 2) fastest ahead of Reine Begström in David von Schinkel’s Spider Mk II and Nick Taylor (Elva 100).  Stuart Hughes had been entered in the Hughes family’s Brabham BT 6, but was a non-starter because of a slipping clutch. At the back of the field, we had Allan Bach Sörensen (Saxon-DKW) and Jac Nellemann (Alfa Dana) with no registered times, probably because of transponder problems.

Two of the drivers who had finished the qualifying practice prematurely were unable to start in the races.  Erik Justesen had a spin, but more severely found something rattling around in the gearbox, so in order not to risk the ERSA box, he decided to pack up.  Likewise, Bjarne Louw’s Hirondelle-DKW, which made its debut, was a non-starter with a damaged piston.  Bjarne had focused so much on getting the car ready that he had overlooked that his racing license needed to be renewed, and therefore Nikolaj Leed, normally seen racing a Volvo Amazon and a Formula Vee, was brought in to drive the car.

The start for Race 1 was scheduled for 3.40 PM on Saturday, but at a quarter to three a messenger arrived to the FJ tent saying that our race was on at 3 PM sharp. Luckily all 13 remaining drivers made it, but those who had not checked fuel or tyre pressure, etc had to do with what they had.  On top of the hurry, a heavy downpour hit that track while the cars were waiting in the assembly area, which meant that the race was run on a very wet track.

Reine Bergström held an initial lead, but had problems with his wheels locking every time he tried to brake, which meant that he quickly fell back to third place behind Jonathon Hughes and Nick Taylor.  Unfortunately for Hughes, he hit a very slick spot on the track and crashed into the concrete barriers while comfortably in the lead with severe damage to the right front end of the Lola.  This left Taylor with an unthreatened lead, which he held to the chequered flag with Bergström second and Tim Bishop (Sauter-DKW) third.  Jac Nellemann showed excellent car control in the wet and brought his Alfa Dana up from last on the grid to fourth place at the finish ahead of Ole Vejlund in Jac’s Volpini, while Bill Hemming (Tojeiro) beat fellow Australian Kim Shearn (Lotus 18) to take sixth place.  Actually, the official results showed Vejlund in ninth place and it was not until right before Race 2 on Sunday that this was corrected.  Time-keeping had missed one of his laps. Retirements in addition to Hughes were the Swebe-Cooper with a bent pushrod and Peter Barclay in his F3 Brabham BT15.

Sunday started with a warm-up session, now in dry weather, which saw Begström fastest with 1:20.455, more than two seconds ahead of Nellemann and Taylor.  Unfortunately, though, when returning to the paddock he found a damaged rear wheel bearing which could not be repaired in time for Race 2.

11 cars remained for the race 2, where grid positions were determined by the results of race 1.  This meant that Nick Taylor had pole with an empty slot to his right, where Bergström should have been. Row 2 had Tim Bishop and Jac Nellemann and row 3 Ole Vejlund and Bill Hemming.  At the start Taylor took the lead ahead of Bishop, Nellemann and Shearn.  Poor Bill Hemming’s race ended on the first lap when his throttle stuck open and he hit the concrete wall with force more or less ripping off both right side wheels.  Luckily Bill himself was unhurt.  The quartet of Taylor, Bishop, Nellemann and Shearn pulled away with the Swebe-Cooper following in fifth place ahead of Barclay’s F3/1000.  More drama followed when Thorkil Kirk Simonsen’s JAP-powered Alfa Dana F3/500 lost a rear wheel.  On the final lap, the battery in Tim Bishop’s Sauter-DKW (which already had lost part of its exhaust system) fell right through the floor of the car forcing him to retire.

End results showed Taylor as winner ahead of Nellemann with a surprised Kim Shearn in third.  The other three finishers were Peter Barclay in 4th, Ole Vejlund in 5th and Christer Larsson (MRS-Saab) in 6th.  A further two retirements were the Swebe-Cooper with a damaged differential and Allan Bach-Sörensen’s Saxon-DKW when the gear shift lever came loose.

Nick Taylor made the fastest lap with 1:21.114, which was a new track record for Formula Junior. 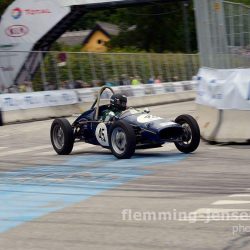 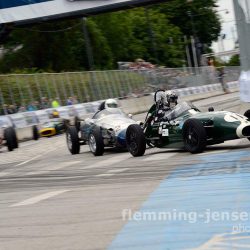 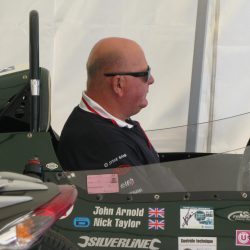 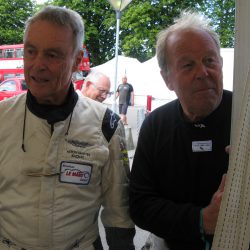 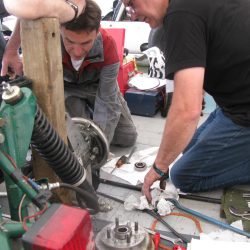 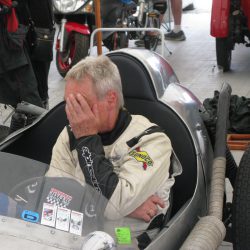 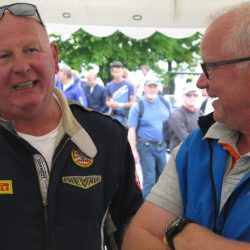