John Sykes reminded me that on the Front engine entry were 3 individuals who had owned Spitfires – Himself, Taff Smith and Justin Fleming – The later 2 being unique Photo Recce Mk 11s – he seemed less impressed when I informed him that I too owned a Spitfire in 1966 – sadly of the Triumph variety rather than Supermarine!

It must await the return of Duncan (Peace and Blessings upon his name) to confirm but I’m fairly sure that this was the first occasion when 2 front engine Condors have raced together in UK.

So Cadwell is after all Cadwell and Stuart circulated serenely to pole nearly 2 seconds quicker that Sykes, Fleming and Morton.

It is of note that as one progressed down the grid, the standard of turnout and preparation remained universally high – a great credit to the Front Engined Brigade.

Sykes made the best start and led the field off the grid, round Coppice, uphill to Charlies but at Park, Roach inevitably found a way through, and by the end of the first lap, the order was  Roach, Sykes, Fleming, Morton, Phillips, Taylor.

Sadly, John Sykes pulled off on lap 2 with terminal transmission trouble which put him out for the weekend.

Alex Morton tried very hard to get ahead of Justin Fleming, but just failed by half a second.

A great drive from James Owen who really has the ex Tony Goodwin Gemini flying – he passed at least 4 cars en route to a fine 4th place – to the huge delight of preparer Iain Rowley.

A most interesting car, not previously seen was Alvin Davies in a Cooper T18 – this is an ex  F3 500cc car, converted in period to being a neat Formula Junior with Ford Engine – it ran with the front engines to start with.

John Arnold finished well up and won class B1 while Tony Pearson won class A.

Without John Sykes this time, Stuart Roach drove smoothly, and seemed effortless – we all know well enough that racing at Cadwell could never be without great effort but Stuart made it look easy – which it most certainly isn’t!

Alex Morton and Justin Fleming resumed their duel, this time, Alex found a way by and pulled out a small gap thereafter.

The BMC brigade was convincingly won by Nick Taylor in his immaculate Elva 100 followed at some distance by James Owen, Mike Fowler and John Arnold.

It was nice to see the Aussie Nota conducted reliably and increasingly quickly by Mark Haynes.

Quite the most magnificent sound came from the Auspuff of the Mitter DKW of Rudolph Ernst – this 2 stroke wonder unfamiliar to some, ran sweetly and reliably all weekend – its fastest time of 1:55 was really a great result – well done.

A certain “Changing of The Guard” here –Alex Ames, out only for the second time in an FJ, drove neatly to secure Pole from another really quick youngster Benn Tilley – a race winner in Formula Ford – more familiar faces were Mark Woodhouse and Pete Morton, who took 3rd & 4th places for row 2.

Peter De La Roche drove his unique BMC Mk2 superbly, sliding it around to 5th on the grid.

Ames made a fantastic start – leading into the first corner by at least 50 yards (we don’t do non- period metres in FJ) from Benn Tilley who chased hard getting everything out of his borrowed Lotus 22 but unable to close on Ames.

Behind, the excitement was provided by Pete Morton and Mark Woodhouse – after several attempts, Morton slipped by and pulled away until the end of the race.

De La Roche drove neatly and well to win Class D2 from Laine Martin in the Ex Fred Boothby Lotus 20.  Laine was somewhat surprised to be informed that Fred Boothby bought this car from Ian Raby for £190 (OK it had no engine or gearbox – and was in 1969.)

Peter Hawkey and Simon Durling enjoyed an interesting tussle further back ahead of Simon Hewes and Martin McHugh in the very interesting North Star.

Race 2 began in some drama – there was an amount of start jumping – not sure of the culprit but no official action was taken. Alex Ames again took an immediate lead – the order settling to be Ames, Tilley, Morton, Woodhouse, De La Roche, Martin and Anstiss – Woodhouse and Morton again had a dice for 3rd place but once in front, Morton pulled out a decent gap.

Simon Durling was lapping quicker than before heading for an unopposed Class win but spun off with 2 laps remaining, and after difficulty restarted, but then he gave best and returned to the paddock.

This race was of course for the Barry Westmoreland Trophy – awarded to the winner on aggregate of the two Rear Engine Races at this meeting.

Most of us will remember that Barry was a very popular and highly competent driver of a lotus 22. In 2008, racing his Lotus 22 at Cadwell, he died of a massive heart attack at the Mountain – every year we remember him in the very best way – the convincing winner of a very fine trophy was Alex Ames – a most talented young man whose day job includes looking after the Halusa Equipe – a task he clearly does rather well – Barry would approve for sure. 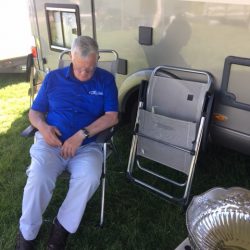 The driving standards observer, Col Bob, waits for Tony Pearson in the Bandini to complete his first lap of qualifying 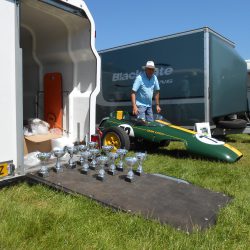 Peter Anstiss feigns surprise as he modestly displays his trophies at Cadwell. He was overheard to say ‘ this is becoming rather tedious’ 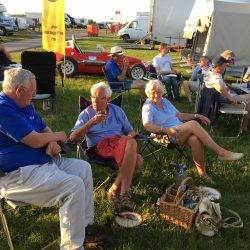 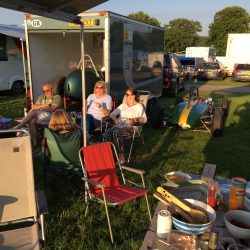 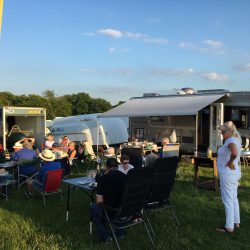