The “GP de France Historique” held at Paul Ricard during the weekend of June 11-13 2021, was the first round of the 2021 Lurani Trophy and the first Lurani FJ Race in Europe since 2019: a great occasion to be back on track with our FJ cars after the long stop due to the Covid!

25 FJ cars with drivers coming from 11 different countries, including Richard Spritz, from the US with his 1959 BMC (car based in Denmark) and Martin Aubert, from Argentina (driver based in Spain), with his 1961 Lotus 20.

Only 5 drivers from UK, a relatively small number due to the anti-covid restrictions, but a very strong group, including Chris Goodwin, son of FJHRA President Dr Tony, who is a professional driver, manager of Bruno Senna and tester of Aston Martin, with a superb 1962 Lotus 22.

Also the 5 Italians: the competitive “Tonetti Brothers”, Roberto in a Brabham BT6 and Pierre in a rare de Tomaso, Bruno Ferrari with his Branca FJ, Francesco Baldanza with his Lotus 22 and me, celebrating 20 year of races (2001 – 2021) with my beloved Wainer n. 46.

I was really excited to also see in the Paddock the wonderful Apache Fiat FJ previously owned by my good friend Franco Beolchi, with whom I had fought on track several times between 2004 and 2008, and it was a pleasure to meet again with the new owner, the Danish driver Erik Justesen (who won the overall FIA Lurani in 2003) and to discuss with him about his “new” car.

The free practice sessions were on Friday morning, however I decided not to participate: I came to Paul Ricard with Claudia, without any mechanical assistance and I needed to “preserve” the car for the races considering that the track is really demanding for our small engines!

Many cars had mechanical troubles during the free practice sessions, including the engine of the de Tomaso of Pierre Tonetti.  Thankfully, he had a spare engine, and his team was capable enough to replace the broken engine during the night allowing Pierre to take part in the races, even though it meant starting from the back of the grid.

In the afternoon we were on track for qualifying; Chris Goodwin seems to come from another planet! With an incredible time of 2’27.959 he gained the “pole”, followed by Mark Shaw in his Brabham BT6 with the time of 2’30.689, separated by a gap of almost 3 seconds!

The second row was occupied by Alex Ames and Lee Mowle, and Roberto Tonetti was in the 5th place with his Brabham.

I qualified in 20th place, in front of Erik’s Apache and this announced a battle as in the good old times!

The Race 1 start was at 10.25 on Saturday morning: pre-grid outside the track, formation lap, stop in the correct position, 5 seconds … and then immediately start! A smart start procedure to avoid the boiling of the engines due to the hot temperatures!!

The start seemed to be ok but, unfortunately, at the first corner, Marc Amez-Droz in his Brabham had a spin and hit the following car, the Lotus of Andreas Halusa when coming back across the track. …. Fortunately, I found a space to pass on the right without damage … Immediately after I saw the “SC” signs blinking on the side of the track … and for a couple of laps we ran behind the Safety Car.

When the race re-started, I had an exciting battle with Richard Spriz, Francesco De Baldanza, Erik Justeseen and Hans Ciers.  After a few laps the first 2 cars were too far ahead. Nothing for me to do about it against their Ford/BMC engines! But with Erik was a different story … we overtook reciprocally several times, and, at the end, I managed to pass him and to stay in front of him.

Chris Goodwin was always 2/3 seconds faster than the following cars and he won the Race with a huge margin of 24 seconds.  Alex Ames kept second place until the 8th lap, when he lost his engine (and a lot of oil on track!!). This was a good opportunity for Roberto Tonetti who, with his Brabham, gained second place, 3 tenths in front of Lucas Halusa, third.

Bruno Ferrari finished a good 5th place and also a very good finish in 9th place for Pierre Tonetti, considering that he started from last place of the grid.

I crossed the line in 17th place, with the satisfaction of being the “first of the Fiat Engines”,  the position of the others being the two Volpini of Jac Nellemann (22nd) and of Silvio Perlino (23rd), slowed by overheating problems, and of the Apache of Erik that, due to a failure of the engine belt, concludes the race in 20th place.

After the race, we had time to check and prepare the car for the second race and, in the afternoon, to visit the wonderful village of the Cadiere D’Azur. Then, in the evening, we were back to the circuit for the dinner party, enjoying the wonderful summer sunset from the box lodges: a good occasion to relax, drinking and speaking about our passion with other drivers and friends!

But, unfortunately, after the dinner we could not stay longer at the Party: we were due to wake-up early the next morning because the start of Race 2 was at 9.15!

On Sunday morning after the last car checks, I was again in the Wainer at 8.45. The good news was that the sun was not too hot at that time!!

This time for Race 2, no problems at the first corner and the race started regularly.

Once again, I had a lot of fun, in particular with Erik Justesen and Hans Ciers. Erik had replaced his engine belt and was determined to overtake me! … after some wheel-to wheel fighting, the Apache overtook my Wainer and for the following 5 laps Erik remained in front of me … I studied him to understand his “weak points” and, on the 6th lap, I was faster than Erik at the exit of the “Saint Baume” corner, overtaking him on the straight, before the chicane North. I then managed to keep my position finishing the race in 17th place, in front of Erik.

Chris Goodwin also led this second race and the podium was the same as in the first race: first Chris, second Roberto Tonetti and third Lukas Halusa. However, the race at the front was a thriller between R Tonetti and L Halusa, with no-one knowing who would triumph until the finish itself.

The other Class winner were Class A: Erik Justesen; Class B2: Richard Spritz, Class D2: Martin Aubert and me for Class C2!

It was a wonderful race weekend together with all friends of FJ; many thanks also to Sarah who was able to organize the race and help all of us even if operating in “remote working”!

I can’t wait to race again and hope to see you all at Nurburgring OGP! 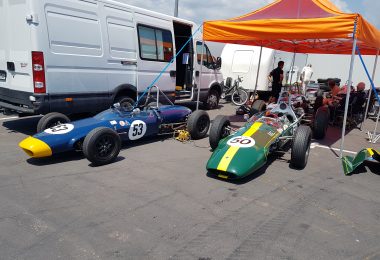 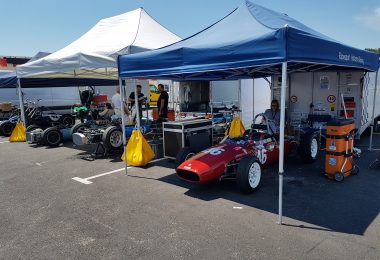 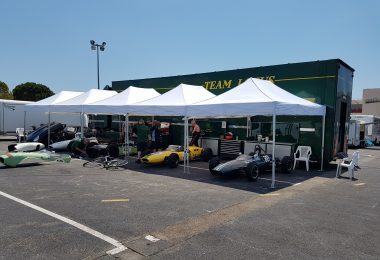 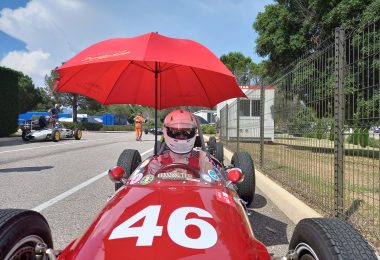 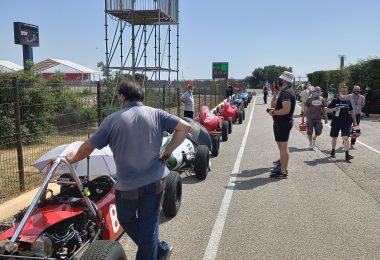 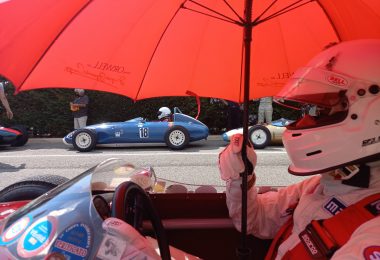 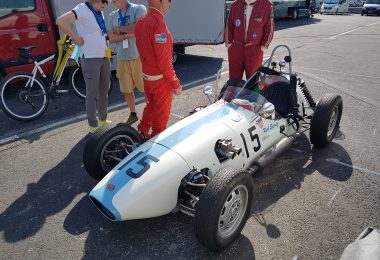 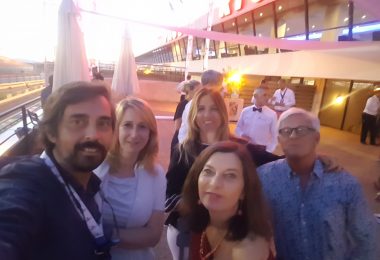 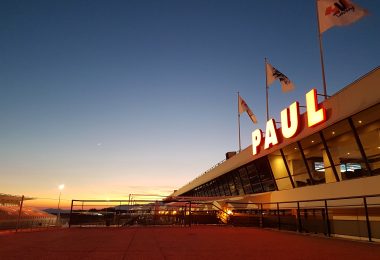 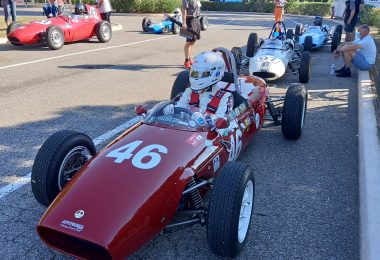 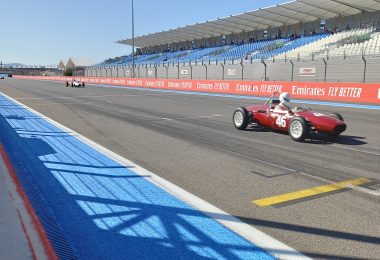 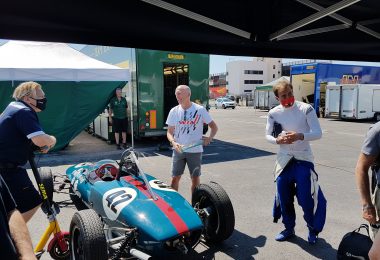 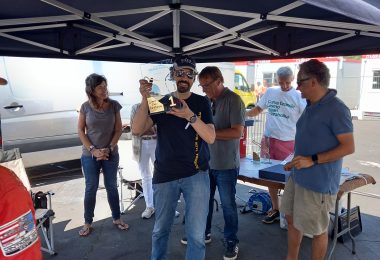