On the Friday evening those who were already present, were hosted to a ‘get together’ at John Arnold’s which set the scene for the weekend.

A good entry of 16 cars were entered for this last but one round of the championship.

The two main championship contenders, Mark Woodhouse in his Elva BMC, and Mike Walker with one of the Team Bond cars were also entered and due to do battle.  Team Bond leader, Andrew Tart was also there in the 2nd Bond. John Arnold was competing again in his Elva; he finished third in last year’s race.

It was good to see Bill Grimshaw who always supports this race in his Moorland. Two very rare cars also appeared, John Sykes in his Merlyn Mk 2 and Alex Morton in his Condor S11. Practice went well and on pole was Chris Drake and alongside Stuart Roach in his Alexis Mk 2.

Very unusually, after the green flag lap, pole man Chris Drake overshot his position on the front row, he went through the pits and a second green flag was ordered.  This time Chris went to his proper position and everything was correct to start the race.  A good start was made by all and Chris Drake led from pole and behind was Stuart Roach.  Stuart held on to Chris and it was looking like there would be a dice for the lead, but after approximately 5 laps a wheel fracture sent Stuart off at Gerrard’s Bend, luckily with little damage.  Mark Woodhouse and Mike Walker were close together followed by Andrew Tart.

At the finish, Chris Drake won very comfortably, then Mark and Mike. Alex Morton had a very good tussle with John Sykes and his lovely little Merlyn – just ‘pipping’ John on the line by 0.1 secs.

So Chris Drake won Class B2. Winner of Class A was Pat Barford in his EFAC Stanguellini which was going really well after little or no use for a couple of years. 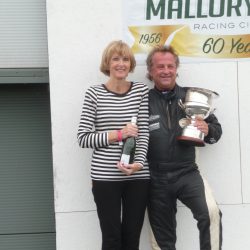 Irene Peutrill (nee Taylor) gave the impressive ‘John Taylor Trophy’ to a delighted Chris Drake on the podium. After the Formula Junior prize giving everyone made their way home after another successful Mallory VSCC meeting.