“You have raced and are racing in many different International Championships for historic single-seaters (FJ, F3, F2 and F1), but according to you, which is the most fun Championship?”

“I think the Lurani Formula Junior: the cars are fantastic to drive, the races are very close and the atmosphere is friendly and convivial.”

I had asked this question to my friend Manfredo Rossi di Montelera, a great fan and very fast driver of Historic Formula cars, after a toast on Saturday evening with an excellent “Chablis” at dinner in a restaurant in Dijon. Manfredo had just won, in the afternoon, Race 1 of the last round of the “Historic Formula 2” Championship with his splendid March 762 … Obviously every historic racing car has its own charm and characteristics, but it is significant that even those who race extremely competitively with the major Formulas never lose the love for the small “Junior” cars!

Unfortunately the “Lurani” Championship for Formula Junior, the most international and popular among Historic Formula Championships, has been severely hit by the adversity of events in the last two years: cancelled in 2020 due to the pandemic, rescheduled for 2021 with only 4 international events, it was then unfortunately “decimated”: covid, brexit and floods in Germany forced the FJHRA organisers to reduce the races valid for the 2021 Championship to just two “French” events: the GP Historique de France, held at Paul Ricard in June, and the “Dijon Motors Cup! held at the beautiful Burgundy circuit over the weekend of 8-10 October.

We had participated in the Paul Ricard race with the 1960 Wainer Fiat and we could not miss this second and last race of the Championship on a circuit that, by the way, remains one of the most beautiful tracks in Europe, still substantially unchanged since the time of the legendary battle between Villeneuve and Arnoux at the 1979 French GP.

Despite the fact that there were only 20 entries, 17 of which made it, the Formula Junior drivers came from 8 different countries, including the American Richard Spritz, who came from Colorado to take part in the race with his 1959 BMC Mk1, which he keeps in Europe. Including myself with the 1960 Wainer Fiat, there were 6 Italians entered; Checco Tonetti in his brother’s Brabham BT6, Bruno Ferrari in a Branca FJ, Andrea Guarino in a Lotus 22, Valerio Leone (not to be confused with the homonymous Valerio Leone who, together with his son Davide, races with F3s in the F3 Classic championship) with the Elva 200 (in my same “C2” class for cars with drum brakes, albeit with the more powerful BMC engine) and Emanuele Guglielminetti with the splendid 1963 Wainer Ford.

Throughout the weekend the weather was sunny but rather cold as in the morning the temperature does not reach 10 degrees while in the hottest hours it did not go beyond 15: better for the engines, as long as you take care to partially cover the radiators with the right amount of tape!

Friday started in the morning with free practice and, surprisingly, many drivers saw their number associated with the black flag! Some drivers stopped, others continued anyway not understanding why they were penalised in free practice… some did an examination of their conscience and tried to understand what they have to confess to be rehabilitated ….

But at the end of the session we discovered the mystery: someone in the race direction believed that it was not allowed to cut the curbs even with two wheels and so … flag to all! Fortunately, the briefing was clear with lots of pictures: 4 wheels off the track no, 2 wheels yes! So: errata corrige and all rehabilitated. Thank goodness!

In the afternoon qualifying was held and everyone took their measurements “kerbs included”. Pole position was played between Mark Shaw and our Checco Tonetti, both at the wheel of Brabham BT6’s and, at the end, the English driver won with 1:32.468, four tenths before Tonetti. Third was Bruno Ferrari who, in his Branca, took his place on the second row alongside Scotsman John Fyda, in a Brabham BT6.

The Apache of the Danish Erik Justesen, in 16th place, was initially considered unqualified, as it was outside the maximum qualifying time of 130%, but then it was admitted to the race by virtue of the application of the Lurani Trophy regulations, as was the Stanguellini of the Belgian Tom De Gres, who, due to electrical problems, was unable to take part in qualifying, but started from the back of the grid.

After qualifying I was challenged about the height of my helmet compared to the roll bar … not being able to remove some vertebrae I solve the problem by eliminating the seat cushion … I will lose a bit of comfort sitting on the bare aluminium, but I console myself thinking that, apart from having put my head in safety, I should have gained in driving sensibility, because, as Niki Lauda used to say: “La makkina si cuita kol setere!!!“.

Saturday was a beautiful day, the start of Race 1 was scheduled for 11.35 am. After the usual pre-grid, we entered the track for the formation lap. Halfway through the lap I see a shiny strip on the trajectory: it’s Richard Spritz’s BMC which is leaking oil and flooding the whole track! We arrive at our grid positions but the start is postponed: the marshals begin the search for the “guilty” party: the pond of oil under Richard’s car leaves little doubt … and the unfortunate American driver, after trying in vain to convince the marshals to let him start anyway, is taken off the grid and “escorted” to the pits.

We wait half an hour for the track to be cleaned and, finally, at midday we start: reconnaissance lap, red lights that come on in sequence, lights off and … go!

I start well and gain several positions … in particular I overtake the other Wainer of my friend Guglielminetti and for a while I keep him behind. On the second lap he overtakes me on the straight and from there starts a beautiful battle because on the mixed road I catch him, I stick to him and in some points I even manage to overtake him, on the big downhill of the ‘Combe’, before the uphill turn Pouas which brings me back to the straight, I flank him on the outside … I almost pass him … but then on the straight he goes away with power, giving me at least one hundred meters, which then I recover on the braking … and so on for the whole race. A wheel-to-wheel duel that reminds me of the fantastic battle between Villeneuve and Arnoux!

While our cars of “Team Wainer” fight it out, in the front, among the leading cars, the “poleman” Mark Shaw starts well, takes off and wins, always keeping the lead with 13 seconds aheadof  Roberto Tonetti in second. The fight for third place was won by John Fyda who was only 3 tenths ahead of the Branca of Bruno Ferrari, completing a podium made up of 3 Brabham BT6 that confirmed themselves among the most competitive Formula Junior cars ever.

As for the other Italians, Andrea Guarino was 7th, while Leone, Guglielminetti and myself finish 11th, 12th and 13th respectively.

When the race was over, the cars remain in the parc fermé and for many of them a real ordeal begins … when, after almost an hour, I go to pick up my Wainer (that after having eliminated the cushion is now compliant) they tell me that there are 9 cars that are retained because apparently “illegal”.

After two hours, all the cars are released, but in the first instance, the cars of Tonetti, John Fyda, Ferrari and Guarino were disqualified for the red dots that were applied to their HTP papers! Fortunately, Sarah, the excellent organiser of the Lurani Championship, intervened, albeit remotely, and solved the situation: the “red dot procedure” was clarified in accordance with Appendix K and the Lurani Regulations and all the drivers previously excluded were reintegrated into the classification and could also take part in Race 2!

We were all more relaxed then and after an afternoon spent shopping for mustard, wine and other delicacies in the beautiful old town of Dijon, we ended the evening in the best way with our legs under the table of a typical restaurant toasting and discussing our passion together with friends.

Race 2 was at 10 a.m. on Sunday morning: the weather was still nice, but colder … This time the start went smoothly and Checco Tonetti managed to get ahead of Mark Shaw; John Fyda ranked third while, unfortunately, Bruno Ferrari with Branca had to abandon almost immediately because of a gearbox breakage.

Emanuele and I continued to battle as in Race 1 and, when the first ones came up to lap us, I joined them and passed Emanuele …. who then overtook me on the straight of the next lap …

With seven minutes to go, Richard Spritz went off at the first corner and the Safety Car came on to facilitate the recovery of his BMC, which had got stuck in the sand on the escape route.

The race resumed on the last lap: I tried to overtake Emanuele, but he caught me out … we were paired at the bend before the straight but on the finish line he was ahead of me by 9 tenths!

On the last lap Tonetti had to fight off the overtaking attempts of Mark Shaw, who remained attached to him until the last corner, but the Scotsman had to settle for second place just 3 tenths from the Italian. Third once again was John Fyda to complete the trio of Brabham on the podium also in Race 2.

The combined classification of the 2 Races saw the overall victory go to Shaw, followed by Tonetti and Fyda. As for the other Italians, Guarino was in the 6th place, then Leone, 10th, Guglielminetti, 11th, Del Conte 12th and Ferrari 14th.

The 2021 Lurani European Championship closed, after only two rounds, with the overall victory to Roberto Tonetti, with 16 points, followed by Mark Shaw (14 points) and Martin Aubert (14 points).  Roberto brings the title back to Italy 9 years after its conquest by his brother Pierre Tonetti in 2012: good blood doesn’t lie!

Myself, with 8 points, has the satisfaction of bringing home the class win (C2) of the 2021 championship and, above all, of having raced, and continuing to race for over 20 years with little Wainer, together with an extraordinary group of friends with wonderful cars that make the Lurani Championship exciting and fun at all levels. 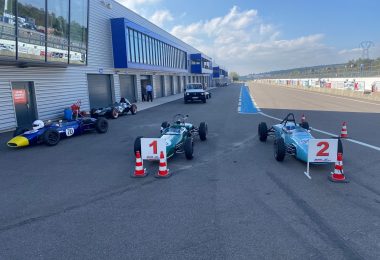 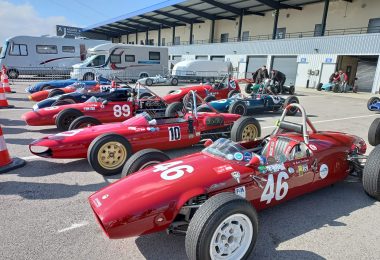 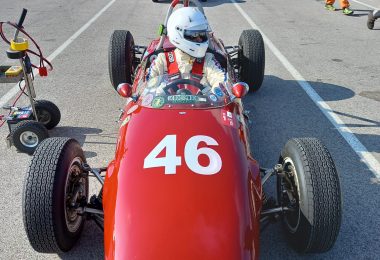 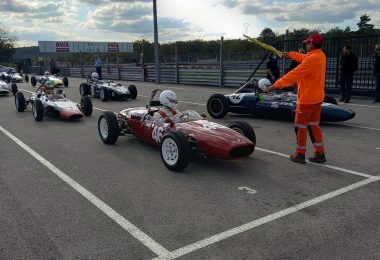 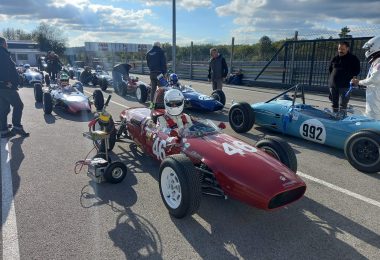 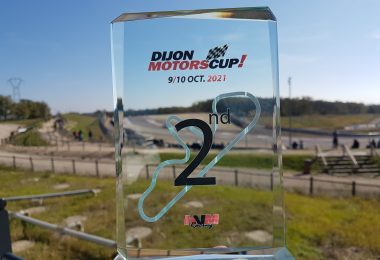 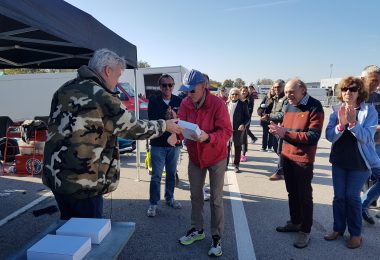 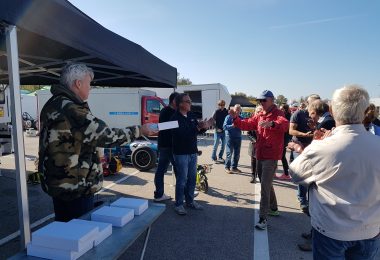 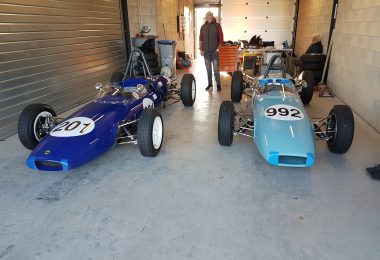 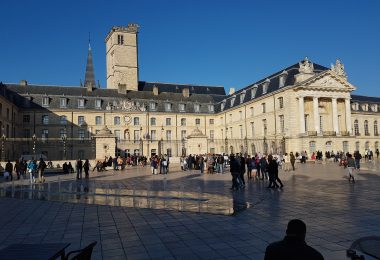 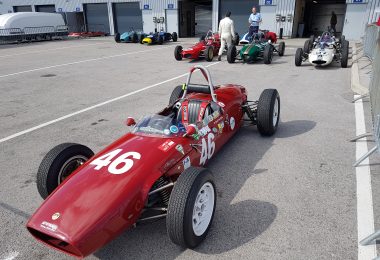 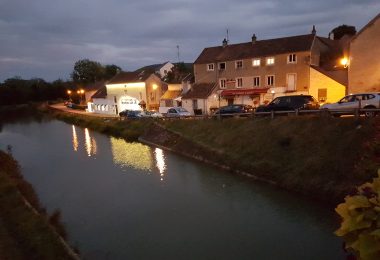 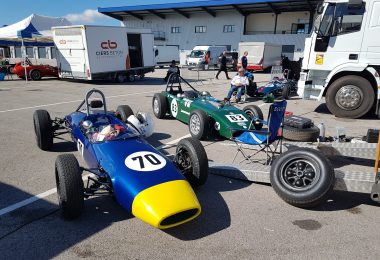 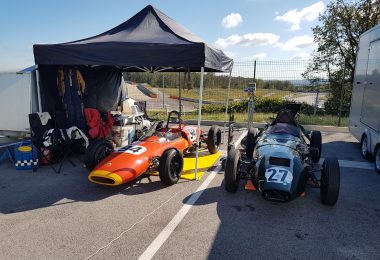 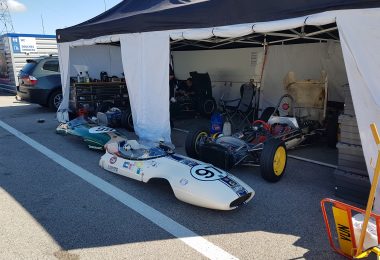 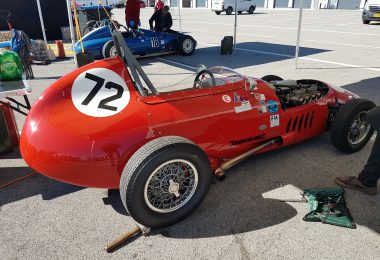 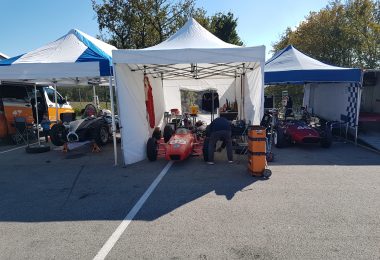