More information about ISIS will be available soon.

More information about INTERMECCANICA will be available soon. 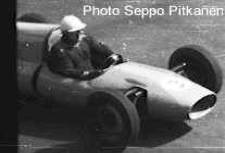 Axel “Acke” Johansson was one of a team of six based in Stockholm, Sweden who decided to build a batch of Formula Junior cars for the 1960 season. The others were Gustav Andersson, Egert Haglund, Sven Mattson, Eddie Jacobsson and Olle Björklin. Plans were to build five cars, but it remains uncertain how many were actually built in the end. Most probably it was only two, one for Johansson known as the Cooper-Wartburg (or sometimes the IFA/Wartburg) and the other for Gustav Andersson, his car being known as the Gason-Cooper-DKW.

Johansson produced a frame copied from his F3/500 Cooper Mk 12. Although there were some modifications, it followed the Cooper tradition of staying away from straight tubes. The suspension was also copied directly from Cooper or might even have been original parts from the Mk 12, the only modifications being in the anchoring of the typical Cooper “curved leaf”, the idea being to allow some quick adjustment possibilities for the camber.

Originally, the plans had called for a SAAB engine, but SAAB did not show any willingness to cooperate. Instead, an engine from IFA-Wartburg in the German Democratic Republic was chosen, also that a three cylinder two-stroke engine. SAAB offered to sell an engine to Johansson, but at a price three times that of IFA-Wartburg. In addition IFA-Wartburg promised to support the project with a specially cast cylinder head. Maybe a spin-off from work done by or for Heinz Melkus? Three Amal carburetors were used for the fuel feed and an initial output of 70 hp was expected with hopes of reaching 75-80 hp with some further development.

The transmission from the gear-box, which was an original Warburg ‘box, was by means of chains, which also allowed the complete engine-cum-gearbox to be installed ahead of the rear axle, but above all made changing the overall ratio a simple operation. One could suspect some East German influence, since the Melkus-Wartburg had a similar system.

Johansson’s first race with the car seems to have been in Helsinki in the spring of 1960, but he never started the race following a disqualification during practice for reasons unknown today.  The only other race where I have found Johansson and his Cooper-Wartburg was Vikingaloppet on a 1000 m sand oval at Örebro, Sweden. The race was run in two heats, with the best time independent of heat deciding the overall results.  In heat one, Johansson was 7th of seven finishers one lap behind the winner. In heat two, he was 2nd out of four finishers, but since heat two was so much slower because of rain, his total overall postion remained 7th. For 1961, Johansson had a Lola Mk 2, but it seems he only started in one race, Kanonloppet at Karlskoga in August.

It remains unknown to me what happened to the Cooper-Wartburg. There is a statement in Bernard Cowdrey´s Formula Junior book indicating that the remains are around somewhere, but I do not know the source of that information.