With The Velodromloppet Historic GP at Karlskoga being the premier historic in event in Sweden, there is usually a turnout of more Formula Junior cars than seen at other Swedish events.  Well, a good turnout is relative…  This year there were eight Juniors for their two races, one on Saturday, one on Sunday, with Petter Huse (Focus-Ford Mk IV) from Norway being the only non-Swede.  The Swedes were Hans Hillebrink (Lotus-Ford 20), Jörgen Brynne (Merlyn-Ford Mk 3) and Lars-Göran Sjöberg (Cooper-Ford T59) in the 61-63 class. In the 58-60 class we had Peter Pettersson (in Ingvar Malm’s Focus-Peugeot Mk III), Ingvar Malm himself (Elva-BMC 100), Fredrik Bolander (Elva-BMC 100) and Anders Orrstjerdt (in Christer Larsson’s MRS-Saab).  Two competitors were missing, Christer Larsson (Cooper-BMC T52) who have been forced to give this season a miss due to health reasons, and Ulf Pettersson (Lola-Ford Mk 3), who preferred a family holiday rather than going racing. In addition to the Juniors, there were also a Lotus Eleven and a supercharged MG TC on the Junior grid.

The schedule had two practice sessions on Friday, followed by qualifying on Saturday morning with race 1 in the afternoon. Race 2 then followed on Sunday. Unfortunately, Bolander got into serious gearbox issues already in first practice and therefore decided to pack up.

Qualifying saw Huse quickest with a time of 1:17,668 with Hillebrink not far behind at 1:18,149.  Then there was a large gap to Brynne who had several issues with his car, which he has not raced at all for a couple of seasons.  Pettersson was next ahead of the car’s owner, Malm and then Orrstjerdt.  Sjöberg’s Cooper still suffered the hot-start problem seen at Hockenheim, and additionally decided to stop at the first corner, so no time recorded.

Hillebrink was quickest away at the start of race 1 ahead of Huse, but on the next lap, he braked too late for one of the corners and had to use the escape road.  This left Huse with a comfortable lead, which he kept until the finish with Hillebrink 12 seconds behind. Brynne followed in third but had already been lapped once after a spin and in a car which clearly had issues, with Pettersson four seconds behind. Malm was fifth ahead of Neergaard in the Lotus Eleven and then Orrstjerdt. Sjöberg was a non-starter with a cracked engine block (the oil looked like Bailey’s Irish Cream but tasted worse…).

In race 2, Hillebrink once again was quickest away but he was soon caught by Huse, who waited until he felt it safe to pass given that Hillebrink’s braking seemed rather desperate, on several occasions going into the corners with locked wheels.  Once ahead, Huse had no problems to win the race with a gap of eight seconds over Hillebrink. Brynne had been forced to retire after only two laps with a very rough-sounding engine, which elevated Pettersson to third ahead of Malm, with Neergaard’s Lotus Eleven less than a second behind, and then Orrstjerdt. 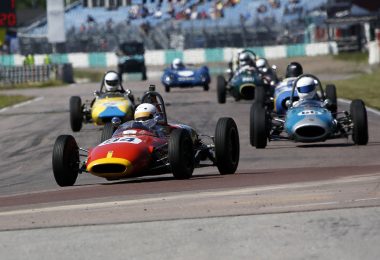 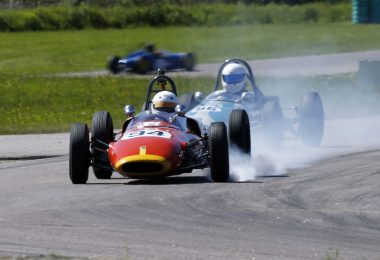 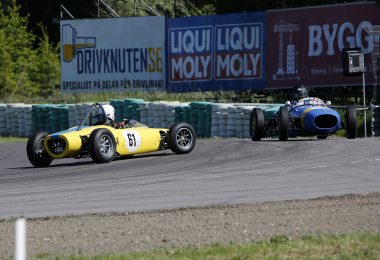